Journey of the Voice – Inspiration from a look 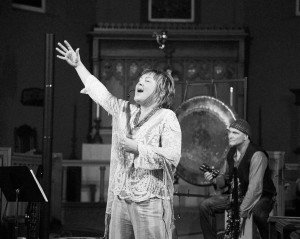 The other day I looked through some old website links I had saved.

And one was for the music department of UVIC where Dr. Gerry King is head of the department and has made a name for himself in the conducting world.

I enjoyed reading again the many accomplishments of Dr. King and how he has been acknowledged for his incredible musical gifts.

He was the music teacher at Mouat Secondary where I was a student in grade 12 and had signed up to sing in a Jazz Choral group.

I had been known as a pianist and had accompanied the choir the year before under a different choral conductor.

I realized during that year that I greatly enjoyed the music we did but always felt slightly unsatisfied playing the piano.

There was a moment when I realized I would rather sing and so I signed up in my last year of high school to sing in the Jazz choir. I was shy about my voice and sang a quiet alto. But secretly I learned the parts of the different soloists and knew them well. One day, one of the soloists forgot her line. Mr. King got a very annoyed and frustrated look on his face. I could tell that this man had an incredible work ethic, sense of determination and a high musical standard. As students we loved music, but many had never known the kind of passion and dedication that Mr. King represented. I felt the energy of this man and he motivated me to a high standard just by his presence.

In a sudden moment of strange courage, I realized this moment of forgotten lines was my opportunity. I began to sing the part that the soloist had forgotten. And I sang it well. I could feel the music and knew how it should be sung intuitively. I was very nervous and I knew I might get yelled at for stepping into someone else’s territory. But I did it anyways. What happened next is a moment that lives in my mind to this day, over 25 years later.

Mr. King looked at me.

And his face spoke volumes.

He was shocked – that much was very clear. I was doing something he never expected from me. I was the quiet good girl in the back row.

And quickly after the look of surprise came a look of delight and recognition. Recognition of musical understanding and ability. I don’t say this out of any pride, for that look that day from Mr. King to me was an incredible gift.

I became the soloist from that day on in that song, called S’wonderful.

After that year, I again allowed my voice to retreat into a quiet place until about dozen years later when I knew I was going either into a great depression or embark on a journey to really discover my voice.

As I began the journey back to sing so many years later, I remembered Mr. King’s look at me. That look of delight and of knowing ‘this girl CAN’.

I had so many voices in my head telling me ‘I CAN’T’.

But I was re-learning new truths.

And that memory became part of a foundation of what was true.

The voice is there.

It may have been silenced.

It may be shaky.

It may have forgotten.

But the voice lives.

And so I am grateful to Dr. Gerry King and the look he gave me all those years ago.

It reminds me of how one small act can change a person’s life…it can be remembered forever.